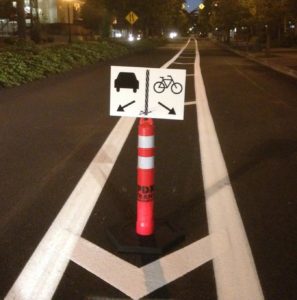 This post provides links to independent groups making DIY transport improvements to improve pedestrian and bicycle safety, and articles about their work. I’ll try to keep it updated, but feel free to add more in the comments.

Demanding More from the City, by PDX Transformation, The Portland Mercury, 20 July 2016.

A crowdfunding project raising money for flowers and safety improvements in Boston.