Many cities and groups are working to make their streets safer and more pleasant for all modes of transport. These efforts are often grouped under the term “complete streets”. Smart Growth America, defines complete streets as:

Complete Streets are streets for everyone. They are designed and operated to enable safe access for all users, including pedestrians, bicyclists, motorists and transit riders of all ages and abilities. Complete Streets make it easy to cross the street, walk to shops, and bicycle to work.

This page presents examples of how crowdsourcing is being used to help create complete streets. Since the project focuses on sustainable transport, this page emphasises pedestrian and urban design issues, while bicycling has its own page. (Note: we have not found many examples of using crowdsourcing for helping create complete streets, feel free to send us any you know about!) 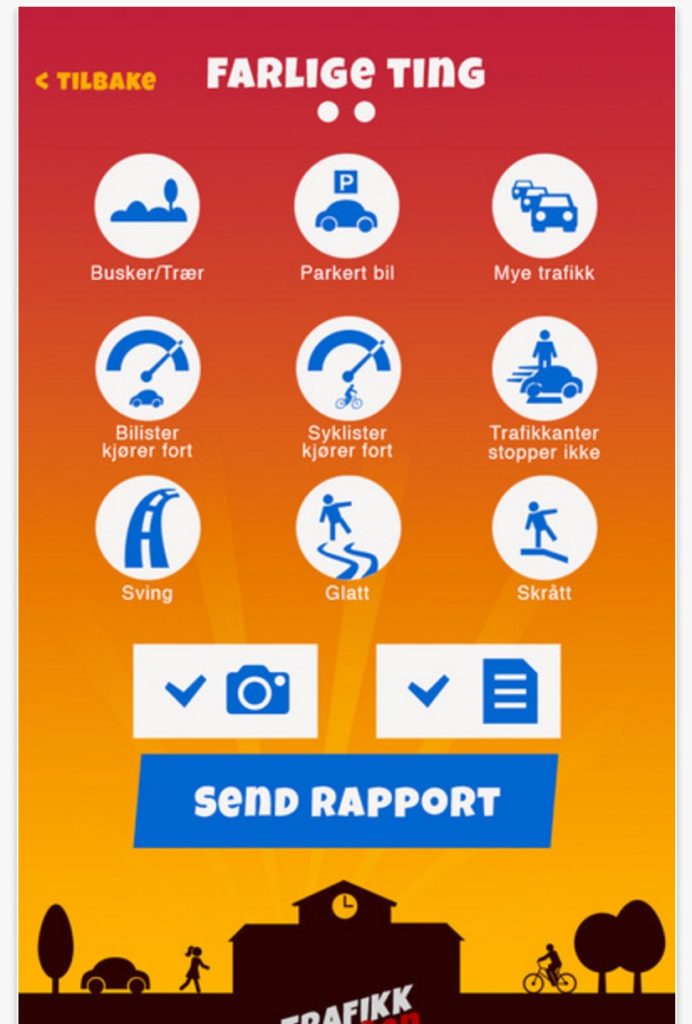 The City of Oslo Norway has developed a smart phone application that allows children to report transport problems they encounter on their way to work. It’s an ingenious blend of gamification and reporting. This video The Traffic Agent, How it works! on YouTube explains the idea (English). This is such a cool project we’ve added it to our pedestrian games section below too … you can watch the video there.

More about the project from The Guardian The app that gives Oslo’s children a direct say over their own road safety.

WALKscope is a map-based crowdsourcing application that allows residents to evaluate the quality of sidewalks. They can provide basic data about the sidewalk (or lack of sidewalk!) and add photos. There is a feature for discussing the sidewalk section for others to add comments. The application allows users to click on individual sidewalk sections to see the data and also allows them to obtain aggregated data. It also includes a rating system to indicate how good the sidewalk or walking experience is. WALKscope also allows users to provide information about intersections and to add pedestrian counts (see our page on sensor data collection).
The application is available in Denver Colorado. Source: Planetizen Top 10 Websites 2015

Wien zu Fuss is part of the city of Vienna’s Mobility Agency dedicated to improving pedestrian safety and conditions in Vienna Austria. The website (above) has a “Wunchbox” (wish box) for people to enter ideas for improving walking in Vienna. Many cities and agencies have similar websites that allow people to report problems and suggest ideas.

Ringstrasse 150 is one of our projects. It’s a collaboration application designed to generate ideas and increase support for a better Ringstrasse. It consists of the RingRide mobile phone game designed to engage and educate people, and the Ringstrasse150.com website for getting involved in improving the Ringstrasse’s bicycle and pedestrian facilities. More about Ringstrasse150 from Our Projects.

MetroQuest is public participation software that provides a wide variety of components including engagement, education and process elements that can be mixed and matched for specific projects. In this case MetroQuest was used to help develop Ottawa’s pedestrian and bicycle plans. The application was provided online in both French and English to gather people’s comments on pedestrian & cycling behavior, origins, destinations and routing, levels of comfort, and recommended improvements.

Many have groups acting independently to improve safety and livability of streets and urban spaces including San Francisco’s SFMTrA and Portland’s PDX Transformation. See my post DIY transport groups for updated information and articles about DIY groups. See my page ACT! DIY for a full list of DIY resources.

Walk Your City is DIY wayfinding

Walk [Your City] helps you boost your community’s walkability, linking informational street signs for people with web-based campaign management and data collection to complement traditional approaches to wayfinding. It’s a great example of Do It Yourself (DIY) Urbanism (source: Atlantic CityLab’s The Best DIY Urbanism of 2015).

Here are games we have found that are designed to teach people about complete streets (e.g., pedestrian safety, street design). More on our transport games page.

Meet-the-street is a mobile phone game developed for the Swiss pedestrian advocacy organization Fussverkehr Schweiz (German) by Feinheit Kreativ Studio in 2013. The game focuses on having players try to cross the street at different types of intersections with varying levels of traffic.

The game presents several different scenarios and players control the speed of vehicles and pedestrians by touching or swiping over them to prevent collisions. The game includes quizzes on pedestrian safety that give players extra lives if they answer correctly.

The Traffic Agent - How it works!

The City of Oslo Norway has developed this game to encourage children to report transport problems they encounter travelling to school. They have made the reporting process into a game by adding a neat theme (secret agents) and gamification. Fantastic example of using games to help improve transport safety.